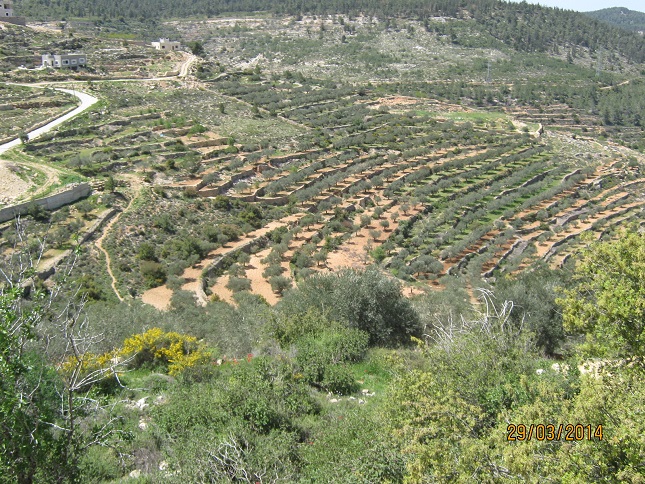 The Palestinian village of Battir was inscribed as a World Heritage Site in 2014 and immediately put on the World Heritage in Danger list. Battir, described by UNESCO as the land of olives and vines, is on the world heritage list for its terraced farming and irrigation channels. The inhabitants of Battir have preserved a traditional agriculture of growing fruit trees and vegetables on the terraces, built centuries ago on the slopes of the hillsides. The water is carried by a system of channels from the ancient springs at the centre of the village and there is a communal system of sharing water by channelling the water to different plots at different times.

The (approximately 5000) residents and the municipality worked hard to get the WHS recognition from UNESCO because “we hoped that it would help save our village from having the same fate as our neighbours,” Muamer, one of the residents, is reported as saying. This refers to the separation wall that is being built in Palestine to restrict Palestinians from areas where Israeli settlers are building settlements on Palestinian lands. A wall would separate famers from their fields.

One year after the UNESCO inscription, Israel’s High Court ruled to freeze state plans to build a part of Israel’s separation wall through the centre of Battir – a victory for the locals who protect and celebrate their very special landscape. Battir is the only village in Palestine that has been able to resist the wall, largely due to the WHS status and protection under international law.

Residents of Battir celebrate festivals – in the autumn, the festival of aubergines, in the spring, the celebration walk between Battir and Jerusalem (Battir used to be called the vegetable basket of Jerusalem). Together with the authorities, the villagers have encouraged tourism, offering accommodation locally, and establishing an eco-museum. The British Council funded the restoration of the Roman spring and Bath in the centre of the village. A management and conservation plan is being prepared.

However, all this changed in December 2018 when, in the middle of the night, Israeli armed settlers turned up to establish a road and flatten land for a caravan which is the forerunner of a settlement. Israeli bulldozers razed and levelled 15 dunams of Palestinian agricultural lands (about 4 acres), uprooting about 60 olive trees. The farmers resisted this but Battir is clearly a WHS in danger.

Despite all this, the message from the mayor is one of peace. The people of Battir just want to be able to farm their lands in peace and enjoy the beautiful place they care for.

Mary Sabina Stacey is a local historian based in Bath who visited Palestine last year.