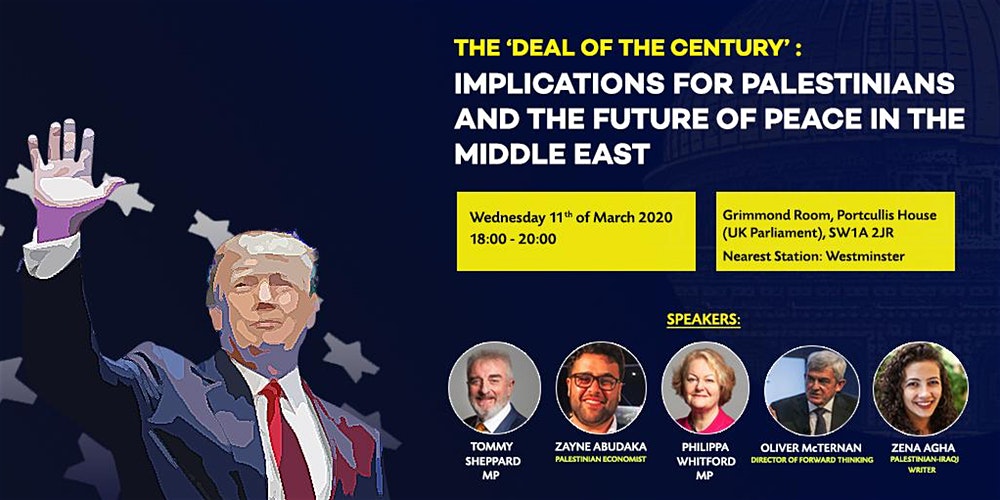 Deal of the Century: Implications for Palestinians and the Future of Peace (EuroPal Forum Seminar)

EuroPal Forum hosted a seminar at Parliament on 11 March to explore the implications of the so-called Deal of the Century, as part of a wider series of seminars across Europe intended to bring together the expertise of those with backgrounds in public policy, law, academia and economics to discuss prospects for peace holistically. As one audience member stated, she feels incensed that we even have to get together to discuss such an absurd and one-sided plan, but at least it gives us a springboard to strategise and raise the issues. We’ve written a short summary of the key points of each panellist, and will circulate EuroPal’s own report of the event when published.

Zena Agha, a policy fellow at Al Shabaka, stressed what the plan represents is more meaningful than its specifics. The power asymmetry is cataclysmic, she said. What does it say that even a Palestinian leadership which openly coordinates with its occupier wasn’t consulted in a peace plan? It truly shows the disposability of a Palestinian partner. Oslo marked a shift where liberation was exchanged for (supposed) statehood. Now it is time for Palestinians to revert to the anti-colonial grassroots based movements of the 60s and 70s, she urged. The world’s obsession with the defunct two state solution paradigm bypasses rights and justice.

Zayne Abudaka, editor of the monthly Palestinian Economic Bulletin, sent to over a thousand business leaders globally, gave an excellent economic analysis of Israel-Palestine post Oslo, showing how the Israeli economy skyrocketed through its “dividends for peace” and how Oslo set up implements for Israeli economic dominance. Did you know that Palestinians lose 60 million working hours each year from waiting at checkpoints? This costs an estimated $274 million and about 81 million liters of fuel, at a cost of nearly $135 million. He suggested decentralisation of economic activities within the West Bank and less regressive consumer taxes replaced with higher rate income taxes. The current system benefits rich Palestinians and breeds corruption.

Finally SNP MP Tommy Shepperd pointed out the language of the “deal” is part of the deception, implying a two sided nature which doesn’t exist. Although he hopes the deal goes nowhere, he recommended we take refuting it seriously and as vice-chair of the Britain-Palestine All-Party Parliamentary Group he is proud to feel their pressure has pulled the government back from their initial supportive position, forcing them to reaffirm their condemnation of annexation and occupation. At the inaugural meeting of the APPG in the new government a few weeks back, he said MP attendance was larger than ever, with a good proportion of Conservative MPs in attendance. He emphasised that Oslo was only ever supposed to be a temporary, intermediate phase and promises were broken by Israel and international bodies. He identified three stand out things from the ‘Deal of the Century’: 1) It offers none of the elements that make up Palestinian statehood, whether an airport, the ability to make trade agreements, or security control 2) The right of return has been totally removed from the table in any form and 3) The same with Jerusalem offered as Israel’s undivided capital. These are things which have been part of the negotiations for over half a century, simply removed from view. This deal he said would legitimise and entrench what Israel is already doing even deeper, and make apartheid de facto and unable to be obscured behind the excuse of an “occupation”. With most Palestinians born after Oslo, he asked how we do we engage and re-politicise the new Palestinian population? He also reported that a recent meeting with left-wing Israeli politicians asserted that there was some level of support for the Deal of the Century from an alarming 79% of the Knesset. He recommended engagement with the minority Israeli left critical of the deal as a route for progress.