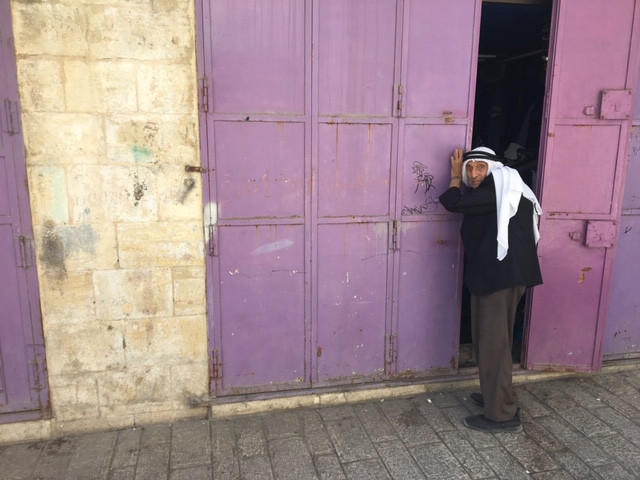 Walking with Social Workers in Palestine

David Harrop, a British social worker, runs The Palestine UK Social Work Network. Here he shares stories with PCF from a recent visit to Palestine, which brought together social workers from the UK and Palestine in order to share practices, and explains why he is seeking funding for a film about this project.

On our recent walking tour, which we undertook jointly with social workers in Palestine, we met together for an evening meal, around a table laden with Middle Eastern food, of bread, olives, hummus, homegrown pomegranates, figs and dates. In broken English and lots of hand gestures, we shared our food and our experiences of the day. Our hosts were Ahmed and his wife, both farmers from the village of Duma on the West Bank in Palestine, who were hosting us for the night.

The following morning, we assembled in the middle of the village, outside the gates of the small compound which enclosed the family home, as well as a few houses and an olive grove. From before daybreak, we had heard the sound of rural activity of villagers preparing themselves for another day of toil, bringing in the annual olive harvest. As we were waiting, Ahmed directed our attention to the small square single-storey building to our left.

It was deserted and derelict, with broken windows and weeds growing round it. Fighting back his emotions, he told us that it had been the home of his nephew. As with most rural farming communities in Palestine, many of the villagers have close family ties and connections to their neighbours.

According to Ahmed, on the night of the third of January 2016, three youths from the illegal Israeli settlement had crept into the village, in the middle of the winter night and had carried out an arson attack. They firebombed the home as the family slept, killing the young man and his wife. His wife’s body was found clutching a blanket as she had tried to get out of the door, presumably believing that she had her eight-month-old son in her arms. The body of the child, however, had been dropped in the doorway and when people were able to beat back the flames, the child was so badly burnt that only half of the charred upper torso remained.

As Ahmed was telling us this, he appeared to be back in the moment when he and his neighbours tried to save the family, and his pain and distress was plain to see.

The three young perpetrators were arrested, but there does not appear to have been any meaningful prosecution of them. There are, unfortunately, plenty of substantially evidenced incidents where Israeli settler or colonists are known to have killed Palestinians and not been effectively pursued. This atrocity and the murder of this family attracted global condemnation, and has heightened the daily levels of vigilance within the community.

It was hard not to contrast this with the draconian punishments given to Palestinian children who constantly fear the incursion of the Israeli soldiers at night, and who are frequently arrested and detained and imprisoned. The Palestinian human rights organisation Addameer has recorded that in any month in 2018 there were between 330 and 280 Palestinian children in the prisons of the occupation.

We were there in October, as a group of UK social workers who have been standing in partnership with our Palestinian colleagues, in one shape or another, since 2011. On this occasion, we were walking together with some local Palestinian social work colleagues through the countryside and villages for three days. Not only were we soaking up the scenery and the activity of gathering the olives, but we talked together, shared jokes and drank mint-tea under the olive trees, and learnt about each other. We wanted to share experiences and reflections of practice in our respective countries, and we had stayed together in Duma overnight.

Further on the walk we stopped at a vigil being held for the hunger strikers, who were being detained in prison. Again according to Addameer, there were on average about 470 Palestinians being held indefinitely in the prisons of the occupation at any one point in time, with no access to legal support for defending themselves, a fair trial, or even having been given a sentence by a court. This, in itself is an instrument of occupation as it is constituted under military, rather than civilian law.

It was stark to listen to an elderly Palestinian woman recounting how her husband was on his eighty-third day of protest, whilst a middle-aged man standing next to her told of how his brother was on his sixty-first day of hunger-strike. Clearly, many of these protesters starve themselves to death as a means of protesting against the violation of their basic human rights, and to raise awareness about the human rights abuses experienced by Palestinians through the military occupation, which has blighted their country for over half a century. They, along with the other protesters, seemed to convey not only distress and grief about their friends and family members, but also a dignified sense of steadfastness and strength. To an outsider it was hugely distressing and yet humbling. Humbling to stand alongside people whom I’ve never met before, but whose family are prepared to die in an extraordinary way as a means of protesting against the callous and purposeful abuse of their human rights.

Looking at the faces of those who had assembled, and at the anger, defiance and anguish in their eyes, it seemed inevitable that in the same position they also would place themselves on hunger-strike, to defy the occupation and raise awareness of their human rights.

I recently heard a quote from a Palestinian activist, who when asked what role the international community could play in the struggle, responded by claiming that without the international community any Palestinian activity in their act of resistance against the occupation is merely the sound of one hand clapping. Arguably, in being present, witnessing and sharing such experiences, it represents a means of becoming the “other hand”.

We have received a grant from the British Association of Social Workers to create a film about these events. At this point, the film has been accepted for the global Social Work conference in July, where these issues can be shared in an international forum. I am seeking some matched funding to enable the editing and production of the film and we would be very interested in exploring this further.

To get in touch with David for further info or if you can support this project, please email him at harrop_david@yahoo.co.uk.