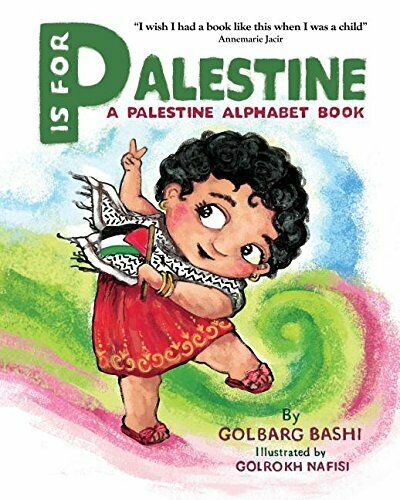 P is for Palestine: UK Exclusive!

by Natasha
Arts and Culture, Blog

P is for Palestine is the first English-language alphabet book on Palestine.

It’s among one of the only books out there for children about Palestine in English. When you consider that there are an estimate quarter of a million Palestinians living in the US, 50,000 in Canada, 45,000 in Australia and at least 20,000 in the UK, this feels absurd! And the need for something like P is for Palestine becomes abundantly clear.

The author behind it is Dr Golbarg Bashi. Iranian-born, she was refugeed by the Iraq-Iran war and grew up in Sweden, before studying in the UK and the US and becoming an academic, teaching history and Middle Eastern studies. She’s currently Professor of Iranian studies at Rutgers University in New Jersey.

It was in Sweden, amid the refugee community that Dr Bashi was first exposed to the Palestinian cause. “I met children from other war-zones and exchanged stories with them. It was the plight of the Palestinian refugees that struck a deep cord with me,” she wrote in Mondoweiss. She goes on to explain they were the only people in the refugee camp without a recognised nationality and homeland.

Her website describes the book as “an educational, colourful, empowering reference for children, showcasing the geography, the beauty and strength of Palestinian culture”. It certainly does that, beautifully illustrated with a spread of Palestinian identity to celebrate, from cultural dishes to historic towns.

Fox News called for it to be “outright banned from American bookstores”, having a particular problem with the claim Jesus was born in a Palestinian city of Bethlehem. We’re not sure where the lie is there?

But Dr. Bashi and her publishing team seem to have embraced the backlash, with some of the defamatory quotes listed on the back of the book under the heading “Critical Acclaim”.

Watch her on the video below shouting lines from the book at her protesters!

“You try eliminate Palestinian culture wherever you can!”

She originally raised the money to create the book with a Crowdfunder in 2017 and expresses her surprise so many people pre-purchased the book; “we felt from the beginning we were doing something right”.

She wanted a book about Palestine to read to her own children, and for the children of friends. “Growing up there was nothing representing my homeland for me, except Aladdin…!” she says. The hope is children will recognise themselves in the curly-haired, kuffiyeh wearing heroin of the story.

“I wanted children to see themselves in this book. The heroin of this book is a little girl with curly hair. I wanted to diversify children’s literature in that sense. I wanted children to know that this place called Bethlehem that we talk about all the time in December is not just an abstraction, it’s an actual place, in the West Bank. The same for Jesus Christ, he’s a historical figure from somewhere. From Palestine.”

“If children who are not Palestinian learn about Palestine, that’s wonderful, but the main goal really is for Palestinian children to feel that you know what, this thing we eat, this place I come from, here’s a book about it.”

Dr Bashi doesn’t shy away from the realities of what it means to be Palestinian today. It would be immoral to paint the occupation out the story. When they come to the giant drawing of the Apartheid Wall, with the Handala graffitied on it, you’d hope Palestinian children of the diaspora will ask their parents, “What is that? Why is it there?”

Dr Bashi’s produced a brilliant follow up in 2019, Counting up the Olive Tree, about Palestinian children learning to count while rescuing an olive tree from being destroyed.

We are absolutely thrilled to be selling both P is for Palestine and Counting up the Olive Tree exclusively in the UK. You can purchase them for £25 and £22 on our Etsy store.