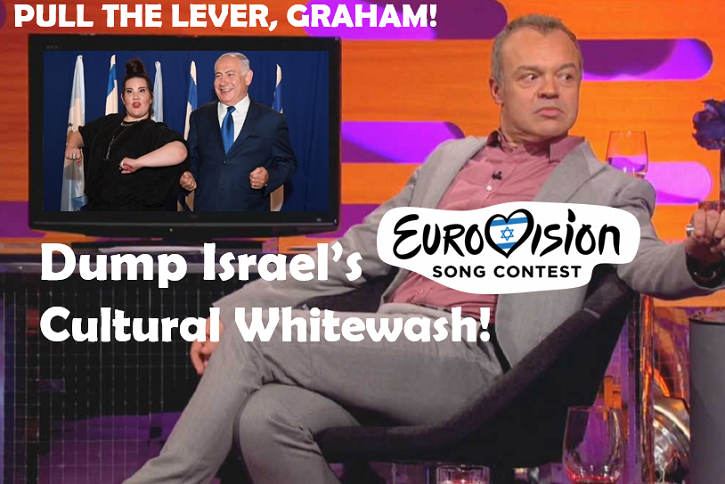 by pcfadmin
Arts and Culture, Blog

On the 12 February, we wrote to Graham Norton at the BBC, beseeching him not to commentate on Eurovision 2019 from Israel and outlining to him the humanitarian case why, on behalf of Palestinian people.

We received co-signatories to the letter from the likes of Roger Waters, Ken Loach, Lowkey and many Palestinian student societies and organisations.

When we did not hear back from Graham or any of his representatives, on the 21 March, we shared the letter publicly on change.org.

Within three days, the petition had received over 500 signatures and over 100 shares on Facebook.

We recognise the difficult position Graham is placed in and in no way wish to smear or bully him, in fact it is precisely because we recognise him as a much-loved public figure that we are calling on him to take a compassionate stand for human rights.

While we know it’s a big ask to imagine Graham breaking his contract and doing what we ask, we believe the impact it could have if he did would be phenomenal. We also believe in people power.

We were galvanised by the support we received and the widespread empathy with Graham’s situation, and will let the voices of some of our co-signatories do the speaking:

“Hosting Eurovision is the ultimate victory in Israel’s mission to improve its public image by ‘artwashing’ its crimes. Here it can theatrically display itself as a diverse, welcoming and liberal society to an international audience of 180 million people, using this charade to strengthen its regime of oppression and ethnic cleansing.

By projecting his voice to millions from Israel, in the state which forcibly silences Palestinians, Graham would help to mask their suffering, sustain their pain and help to whitewash the crimes committed against them. Although Eurovision prides itself on the values of ‘inclusion, diversity and unity’, which we all of course welcome, there is nothing more contradictory to this than Israel’s occupation, apartheid and colonialism.” – University of York Palestinian Solidarity Society

“It’s crucial, at a time of increased hostility against the Palestinian people, that we extend our solidarity, however we can!” – University of Birmingham Students for Justice in Palestine

“Eurovision 2019 should be boycotted until Palestinians are treated with humanity.” – Anne Garvey, Cork

“This is about people and everyone deserves compassion. The apartheid era was partly brought to an end by international boycotts and this could have a similar effect.” – Carolyn Regan, London

“Please don’t validate these evil oppressors with your wonderful charm and humour, Graham… you are lovely, Isreali Zionism is not!”  – Toni Malloney, Croydon

“I’m signing because I support the cultural and academic boycott of Israel. A big name like Graham Norton should also be big-hearted. Refusing to host the Eurovision Song Contest in Israel would send a message to the Israeli government that they are held responsible for oppressing, starving and killing Palestinians, including many children.” – Pauline Fraser, Worthing

“I have great respect for Mr Norton and I hope he stands up for the oppressed people of Palestine. Thank you” – Rick Clarke, Wooburn Green

“This is a peaceful way to bring pressure to bear to change the plight of the few who suffer the most.” – Glen Macklin, Much Wenlock

“Israel is an apartheid state and fails to meet Eurovision’s values on so many counts. Time to stand up for international law and morality!” – Mayonne Coldicott, Frensham

“Israel is running a violently apartheid state. The world must stop looking the other way.” – Miriam O’Donovan, Ireland

“By appearing on this show, Graham, you are helping to enable propaganda for the Israeli apartheid state of illegal Occupation. Please need the words of Mandela and Tutu and think again.” – Dorothy Rimmer, Manchester

“Israel must not be allowed to hide its disgraceful treatment of Palestinians behind a facade of glitter” – Paddy O’Keeffe, Brighton

“Graham is great! It’s not right for him to be the voice distracting from the destruction of a people and annexation of land, by murderous means.” – Kevin Johnstone, Northampton

We will continue to share this letter until Eurovision on May 18, and we hope it will grow until it cannot be ignored any longer.

Read the letter below:

Sorry, the comment form is closed at this time.