by pcfadmin
Pulse of Palestine

Stories from the Week:

Read more on each story below.

22 December: Four Palestinians shot dead on another week of protests

Funerals were held across the Gaza Strip for four Palestinians who were killed by Israeli fire during border protests the day before. Those killed were Maher Yasin (40); Abdul-Aziz Abu Shari’a (28); Ayman Munir Mohammed Shabir (18) and Mohammad Mo’een Jahjouh (16).

As is the case every year, Israeli authorities obstructed Christmas travel to Bethlehem for Palestinian Christians from Gaza. Ma’an News reported a common tactic being to only grant permits to parents and not their children, or vice versa, essentially prohibiting travel for all the family. Restrictions also kept many Christians in the West Bank, of which there are over 46,000, from travelling to Jerusalem. There are around 3000 Christians in Gaza.

Bethlehem saw its busiest Christmas in years, with hotels fully booked. Hundreds gathered on Manger Square to hear bagpipes and parade past the giant Christmas tree.

“We haven’t seen numbers like this in years,” said Palestinian Tourism Minister Rula Maaya, adding that the 3 million visitors to Bethlehem this year exceeded last year’s count by hundreds of thousands.

Israel approved the construction of 1451 new housing units in West Bank settlements. On the same day were signs of a new settlement in the Jordan Valley, a fertile area where around twenty illegal settlements are already established, as Israeli settlers set up tents on the east of Khallet.

Palestine announced its intention to apply for full state membership of the United Nations. Foreign Affairs and Expatriates Minister, Riyad al-Malki, will initiate the application in person on his visit to New York next month.

Palestine needs support from nine out of the United Nation Security Council’s 15 member states, with no vetos from any of the five permanent members: Britain, France, China, Russia and the United States.

Palestine was granted status as a UN non-member observer state in 2012. This decision was made by the General Assembly where no state holds a veto power.

Israel vowed to work with the United States to block the bid. Israel’s UN ambassador Danny Danon said, “We are preparing to stop the initiative. The Palestinians pay terrorists and encourage violence yet seek to become a member state of the United Nations.” 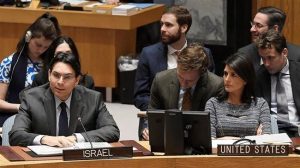 UK activist groups War on Want and Palestine Solidarity Campaign announced in a joint statement that HSBC have responded to BDS campaigning and emails from 24,000 people and will divest completely from Elbit Systems. Elbit is one of Israel’s largest arms manufacturers and makes deadly drones used in attacks on Palestinian civilians.

War on Want first exposed HSBC’s link to Elbit Systems in 2017 and PSC groups heightened the campaign over the past year with online activism and by picketing branches. 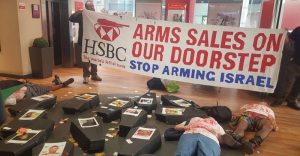 Despite this victory, HSBC continues to do business with over a dozen companies selling technology used in human rights violations, including Caterpillar and BAE Systems.