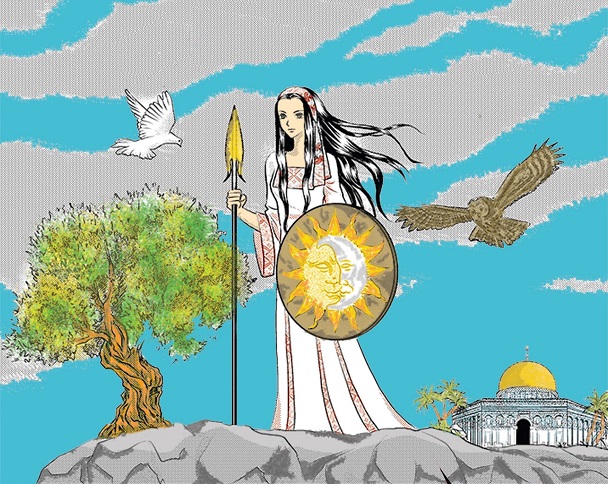 ``These tales happened somewhere under the Sun of Elia, the ancient soul and protector of the city of her namesake. They were written in the first language, the mother of all sounds and silence, at a time when people whispered to the wind, smiled to the sun, caressed the rain in gentle touch, and embraced the earth essence. This language has roots in all tongues that succeeded, so the meaning it conveys shall always reach the pure souls. Elia or Ilia was one of her many names, along with Salem, Jerusalem and Quds...``

Tales of Elia is the first Palestinian comic novel. Proudly supported and sponsored by PCF.

Behind the comic is team Comic Palestine, a group of four writers, designers and artists, aged 25 to 30, living in Ramallah and Jerusalem. The team grew up reading stories about heroes and now seek to use this cherished format to communicate Palestinian identity and ideals to a young generation across the world. They have been working passionately on Elia for four years. The world they’ve created is based on different myths from around the world, but draws deeply upon Palestinian culture.

If you would like to support their venture and get your hands on an early edition, you can do so here.

From left to right:

A Q&A with Team Comic Palestine

We caught up with Team Comic Palestine to ask them more about the project.

What was your inspiration for the comic?
We have been inspired by multiple stories and tales, from our childhood and the popular animation, manga, comic books, fantasy books, global and Palestinian myths and culture, history, literature.

Why does Palestine lend itself to a comic book story/format?
The history and tales in this territory are incredibly extensive, full of adventures, beauty and sorrow, representing them in a comic book format is an engaging, pioneering initiative to portray with pictures, colours and a touch of fantasy.

What have been the challenges?
Being an unprecedented initiative in Palestine, the challenges have been several. Finding the right type of comic design to represent the story that readers can relate to was essential, thus we decided that mixing the Japanese manga style with western style was the best option. In addition, the complexity of the story fabric and balancing visuals with script was also a challenge we had to overcome. And finally, finding trusting publishing and distributing partners that will join us in this venture.

Where would you like to see the comic going in the future?
We would like for readers to immerse themselves in the story, being transported to Palestine and awake their curiosity about this land’s history and people. Furthermore, we want to keep developing the project to have educational comics, and maybe in the future animated series or movies.