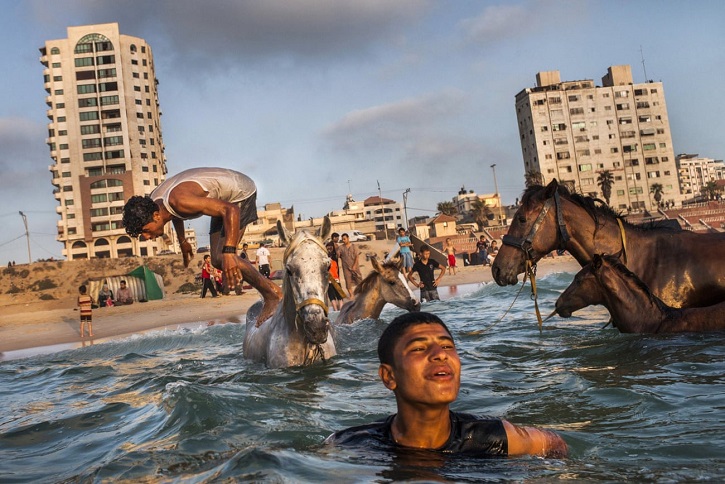 PCF Programme Officer Omar Aziz sat down with Andrew McConnell, one of the directors of GAZA (2019) which premiered at Sundance earlier in the year.

OA:  So what did you set out to achieve with this film and do you think you’ve achieved it?

AM: We set out to show people another side of Gaza, because everyone is familiar with Gaza, if you ask anyone in the world almost and they will have heard of Gaza. And it will immediately conjure an image of conflict and destruction rubble, war, all of these things. But that’s only one part of the story, a small part of the story. And to understand a place and a situation you need to see all sides to the story and so we felt what better way to understand a place than through the ordinary people, who beyond these news headlines, and just look at the place through the eyes of the ordinary people on the ground through their daily lives.

I think it’s incredibly powerful to not make a political film, to avoid that and just go and let the people talk for themselves. And so I hope we’ve achieved it, I think from the reactions we’ve had around the world, from when we first started showing this in Sundance at the beginning of the year and now this release, all the reactions have been overwhelmingly positive, and people have said thank you for making this film and it really shows the side we didn’t understand.

OA: When I watched the film, I really got a sense that time was being stolen from Palestinians in Gaza, and there were some quite strong quotes which I found really powerful.

One of them, the paramedic  ‘for more than ten years now these young men have had no future, no hope, they wake up in the morning with nothing on the horizon, nothing to live for today, tomorrow and yesterday are all the same.’ Another one Ali says ‘I’ve seen men playing backgammon for 15-20 years’. And I was just wondering was that something you wanted to deliberately show, time being stolen from  Palestinians in Gaza, or was it inevitable when you speak to people on the ground.

AM: To be honest it wasn’t something which came up in the discussions in the early discussions, I think it comes out through spending time on the ground and filming with these people. Because so very often they have nothing to do. From day to day you see so many people sitting around playing backgammon, you see youth especially, nothing to do, nothing to fill their time with, 70% unemployment amongst the youth, and if you travel through Gaza you just get a sense of people in limbo, people waiting. So it comes across, it wasn’t necessarily something we targeted, but you can’t help but have it come through and it’s the reason young men will go and throw themselves at a fence because really they’re so, I think they’re just so disillusioned and hopeless that they don’t see any options. And for sure some are will to sacrifice their lives because they really don’t see that they have a future.

OA: What do you want people to do after they’ve watched your film, if anything.

AM: Hmm good question…I hope that they would just pause, reflect, on what’s happening there and feel more aware. And perhaps follow up in some way, look more into Gaza, more into the situation and if that could evolve into, I don’t know, some sort of action.  To feel a sense that they understand the situation more, the situation isn’t just black and white I hope they would feel more comfortable in what Gaza is as a place and what and who the people are.

OA: So over the 5 years of making this film, were you going back and forth to Gaza each year or…?

OA: Did you notice a change…because I remember a quote in the film where he says some thing like, ‘over the last four years  people have stopped smiling, there’s not as much laughter in the street…’

OA: Was that as a photographer?

AM: That was as a photographer…I’ve probably spent altogether about a year in Gaza and we’ve definitely noticed change. When we first went in the blockade was about three years old and there really was a sense that they would beat this, it sort of brought people together, there was great hope in fact that this was soon be over and that they would beat it together. Last year you really feel – what the blockade is now 12 years old? –  there’s no longer that sentiment that this will soon be over and people are resigned now to the fact that this may go on indefinitely and you sense that hopelessness. It’s one of the paradoxes of the film that in one sense there’s great joy within the character of the Palestinians and yet that is very often a surface joy that you see.

OA: A means of survival perhaps?

AM: There’s definitely a survival instinct but it’s definitely a part of their character too. But it comes out for the foreigners and they make you feel really welcome, I sometimes wondered are we seeing the whole picture here, are we seeing the full character. So I think that’s one of the things, some people come away from the film feeling really hopeful, it’s quite a tough watch towards the end, and others say what hope is there really?

OA: And what do the Palestinians in Gaza want from the outside world? I noticed there’s another quote from Karma who says ‘they only give us sympathy, it bothers me so much,’ what is it she’s getting at there do you think?

AM: I think what she’s getting at there is that people see Gaza on the news for five minutes and think that’s terrible, oh those poor people, and then forget about it. And people may think ‘oh that’s terrible we support change in Gaza, an end to this blockade’, so she’s getting at the point that in the western world people pay lip service to crises like Gaza but in actual fact people pay very little and don’t really care that much at all.

OA: Is there anything notable that’s happened to the characters since you shot the film

AM: Mahmoud the surfer has left – he now lives in Sweden, Ahmed the taxi driver has left, he’s returned to Egypt, He was born in egypt I think. Karma is still trying to get out but hasn’t been successful yet. Ahmed and his family who live in the shack by the beach with his 40 kids, the Qatar foundation built them a 5 story apartment block where they all live. I was very surprised when I heard that, know they really were in a pretty bad state in the home they had.

OA: What tips would you give to filmmakers wanting to help the Palestinian cause?

AM: There’s certainly scope to produce more from Gaza, whether by going there, or perhaps by supporting young film makers on the ground. Everywhere you turn in Gaza it seems there’s a photographer or filmmaker. A real burgeoning scene there, that you see in the documentary One Day in Gaza,  the BBC documentary, put together by a lot of footage taken inside Gaza. There’s drones everywhere, people producing real nice content.  I think the situation needs to be talked about more. There’s stories around every corner in Gaza.

To find out where you can watch GAZA head to www.gazadocumentary.com