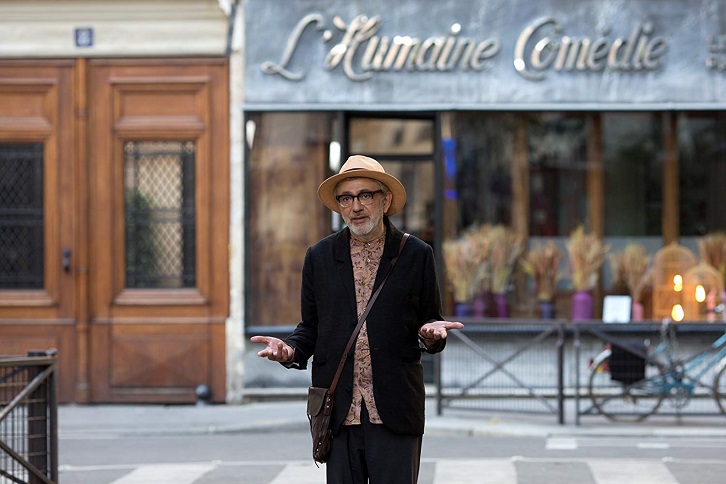 As the credits rolled on the UK premiere of It Must Be Heaven – recently selected as Palestine’s 2020 Oscar entry for the category of International Feature Film – the film was met with rapturous applause by the London Film Festival audience.

The man whose lovable face we had followed on screen through his circular ambles through Palestine, Paris, New York and back to Palestine once more, took to the stage, with a head of greying hair, endearing smile and film-maker garms including thick lenses, black converse, scarf, long black coat and over-the-shoulder satchel.

This is Elia Suleiman’s fourth feature film and, he tells us straight away, his favourite to make. Not because it’s objectively the best, but because he felt happy making it. “I felt free… cheerful and laughing all the time.”

It Must Be Heaven is less of a narrative story, more a set of stitched together absurd and comedic scenes, stunningly shot and sparse of script. In fact, Suleiman’s character speaks a total of two lines in the film and not till about two thirds in, when he answers a New York taxi driver about where he’s from. Perhaps emphasising how his Palestinianness is at the forefront of his identity, and worth speaking for. He even scores himself a free ride for being from Nazareth, “like Jesus!”.

With Suleiman’s first three films having been set in Palestine, exploring the notion of “exile in my own land”, this film is set on what Suleiman calls a global canvas, across Palestine, France and America. “This is my global exile.”

Consistently an outsider in the film, whether in Palestine or outside it, he guides us through an observation of the world, struggling to understand its logic and exposing all its inconsistencies and hypocrisies.

In an almost abandoned Paris, with glorious shots of the city which Suleiman seems to have all to himself to roam, tanks glide inexplicably through the streets and cops ride about looking ridiculous, fighting crime on Segways. In New York, Elia satirises American gun violence, in a scene that grows more and more surreal as he suddenly realises that everybody around him is nonchalantly carrying a weapon, with machine guns slung casually over school children’s shoulders, and weapons continually growing larger and more destructive in size.

Suleiman is making a point about a growing global violence. “The character escapes from one place to find himself in the same place wherever he goes, which is kind of the way I feel these days.”

“There is a sense for me that this is the Palestinian-isation of the world.”

There is no way to escape your homeland.

And by the end of the film, despite everything, Suleiman finds himself heading back to his home in Palestine, back to battling with the same annoying neighbour who steals the fruit from his lemon tree.

Suleiman recalls his younger self having sought after a sort of global citizenship, a feeling that he could belong anywhere and “become at home wherever I go.” Now in his more senior years, he reflects that he failed at this task. Yet with a spout of optimism, he says he sees it more in today’s younger generation of Palestinians, who seem to have come closer to this goal.

“Their Palestinianism is stemming out of belonging to the world. Their activism is in total identification of all causes. That’s what’s making them more worldly, more activist and more citizens of the world in their own homeland.”

At one point in the film, the filmmaker protagonist visits a swanky production studio, only to have his script rejected for not being ‘Palestinian’ enough. Asked whether this is something Suleiman has experienced himself trying to get his films made, he confirms it used to happen all the time, and even with this film the unusual narrative structure and humorous nature was a sticking point. “To the producers, at this point in history, there is no way that Palestinians laugh. They get tortured, they get arrested, so they are victims, therefore we as other ex-colonials are coming to save them.”

“A Palestinian has to stay in his own cage and should not talk about Paris or New York,” he felt was their verdict. Despite of course so many thousands of Palestinians experiencing their Palestinianness as part of a global diaspora.

The film seems to have paid off with this largely Palestinian audience at least, with much recognition on screen with aspects of their own experience. There were hearty self-aware laughs when, at a Palestinian panel event in New York, the chair had to ban the audience from clapping too much for each speaker, as they’d run out of time to hear what anybody had to say. He limits them instead to an absurd sounding single one clap per person.

It Must Be Heaven may fall flat for many of its viewers. Either for the subtle, Chaplin style humour not landing for them, or because it is in some ways one big in-joke for Palestinians and their experience of the world.

But it is also a take on one older man’s isolation and loneliness; the warmest connection Suleiman makes in the film is with a sparrow, who flies into his apartment in Paris and repeatedly perches upon the laptop, interrupting his writing.

At the end of the film, sat in a bar, somebody remarks, “you Palestinians are strange. Everyone else drinks to forget, but you guys drink to remember.”