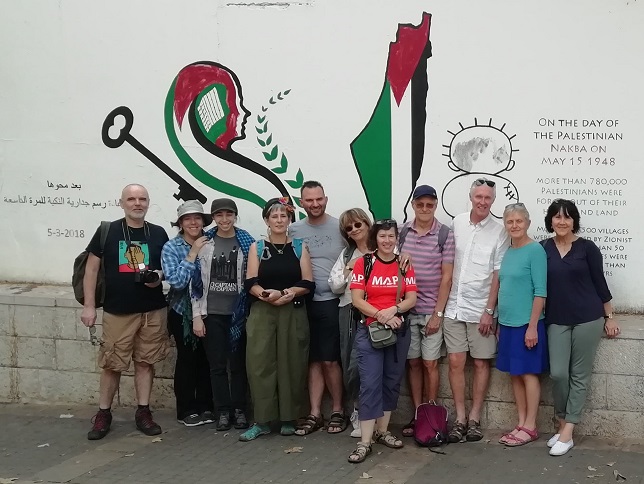 Just Cycle: Day One. Visiting Mossawa Centre in Haifa and hearing from Jonathan Cook in Nazareth

Just Cycle brings groups to Palestine to see the land and meet the people. We travel mostly by bike, which is good for the environment and allows us to experience Palestine close-up.

This October, a group of 12 cyclists from the UK are visiting Palestine with Just Cycle and we began the tour on Friday in Nazareth, the largest Arab town in the Israeli state, with a population of 77,000 people – around 70% Muslim and 30% Christian. The group walked around the city centre and visited Mary’s Well and the Basilica of the Annunciation, built over the site believed to be the home of Mary and therefore a holy site to Christians and Muslims. The old city was quiet except for several groups of visiting pilgrims, and our guide Habib took some time to explain that he, as a Palestinian living inside the Israeli state, feels like a second class citizen in his own country. He told us how things changed in May 1948 – “My family heard about our people being killed so some of them fled to Jordan and Lebanon, but my father stayed – they tried to defend themselves but they were not fighters, they were poor farmers, and the people coming in from Europe had resources and had been trained to fight in two world wars. So the Israeli state was created on our land and we couldn’t defend it – one day my father was a Palestinian and the next day he was told he was an Israeli – where are our rights?”

Just up the road from the ancient city of Nazareth is the new city of Nazareth Illit which was created as a Jewish town in the 1950s (but recently changed its name to Nof HaGalil because it kept getting confused with the old Nazareth). The difference in funding received by the two towns is stark but is not shared equally between the residents – the population today is 35% Arab Palestinian – Christian and Muslim – but they are not permitted a church, a mosque, or even a school for their children.

After a delicious falafel lunch in Nazareth the Just Cycle group travelled to Haifa, a town often hailed as an example of “coexistence between Arabs and Jews” but where, in reality, the Palestinian minority population (5% Christian and 5% Muslim) do not enjoy equal rights as Jewish citizens. We visited the Mossawa Centre – Mossawa meaning equality – the Advocacy Centre for Arab Citizens in Israel. One of the centre’s co-ordinators, Amir Toumie, explained how the centre works to improve human rights for Palestinians who live inside the Israeli state. They believe that whatever the current political situation is, there is a need to fight for the everyday rights of Palestinians who hold Israeli citizenship – so they campaign for equality in funding, education, infrastructure, and the law, and they work on maintaining relationships between Palestinians who live in Israel, the Occupied Territories and the diaspora – “We are one people”.

We returned to Nazareth in time to meet with the journalist Jonathan Cook, who is based in Nazareth and who writes about the inequalities and injustices experienced by Palestinian Arab citizens of Israel. The group were shocked to hear about discrimination in every aspect of Israeli society and even written into the laws of the land and the rights of citizens. Jonathan also described how the media is often restricted and intimidated against writing anything critical of the Israeli state.

Tomorrow the group will make an early start and head to the checkpoint to take us into the occupied West Bank. We were due to begin cycling tomorrow but a severe storm is forecast… watch this space!