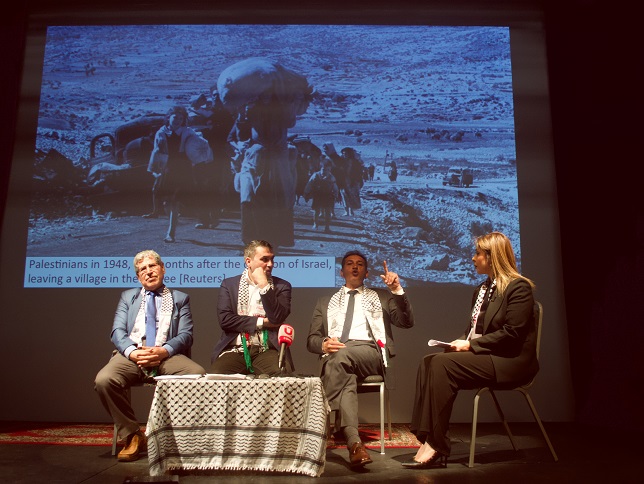 “The Deal of the Century reads as though written by Netanyahu himself”: A panel event on the 71st Nakba Day

On the 15th May 2019, the 71st anniversary of the Palestinian Nakba, Palestine Community Foundation hosted a panel discussion in London, entitled “The Palestinian Cause: From the Nakba to the Deal of the Century”.

After standing for the Palestinian anthem Fida’i, Rajab Shamallakh, PCF Co-Founder and Director, launched the event by introducing PCF’s achievements so far and current projects.

Mr Akram Atallah then initiated the discussion, outlining Israeli incentive for taking coastal regions, such as the port town of Haifa on the Mediterranean coast, with access to the rest of the world and oil, leaving Gaza as the only coastal region not taken. He stated however, that at the end of the day, the Palestinian people have the moral high-ground and will be victorious.

In the next talk, Dr Asad Abushark described the unity he believed was shown during the organisation of the Great March of Return. “Everybody agreed they should be civilised and non-violent.” He went on to describe how the marches have taken many forms, with weddings, dances, dabke and lectures taking place, and even the sharing of Palestinian folklore to bring people closer to the land. Himself from Gaza and at present based in Dublin, he drew attention to his being in the UK this Nakba day by stating, “We demand that Britain apologise and denounce the Balfour Declaration.” He pointed out that rather than do this, the current British government celebrate it, calling it the most important letter in history. Dr Abushark expressed encouragement for BDS, calling it a creative and growing movement, which diasporic communities of Palestinians are heavily involved in.

The third speech of the evening was delivered by Dr Ibrahim Natil, who has been analysing the leaks and implications to the so-called deal of the century, due to be released after Ramadan. “Some things mentioned in the deal have already been enacted,” he told the audience, specifically the US embassy move recognising Jerusalem as Israel’s embassy, and more recently, the ambassador’s house following suit.

Dr Natil does not draw optimism from what he has seen of the deal.

“Everything mentioned in the deal is dangerous … it’s a strengthening of the Israeli position … if what has leaked is implemented, it will protect the Israeli state from self-destruction, giving it another twenty-five years to continue unchecked.” Natil remarked that it reads as though written by Netanyahu himself.

Leaks have been contradictory, with a “new Palestine” pseudo-state referred to in the leaked documents, with no borders and under Israeli control, contradicting what Kushner has said in television interviews in keeping with the two-state solution.

And, Dr Natil stated, there seems no strategy to prevent it. International efforts are our best hope, he urged. It was recognised across the board, however, that Palestinian people have already rejected Trump’s so-called deal of the century.

Audience members, who represented a mix of Arabic speakers, Palestinian and non-Palestinian alike, expressed a range of responses and opinions, some questioning the unity of those working for the Palestinian cause, or the lack of effective leadership.

A Muslim from the Czech Republic asked the panel to outline their vision of a one state. Pointing out that states are dynamic, and he now lives in a different state from that which he was born.

Mizanur Rahman, British Bengali activist for Palestinian rights, asked “What can people in London do to challenge Trump’s deal of the century?” Dr Abushark’s response was to “continue the demonstrations, continue the pressure on Parliament in the UK. Support BDS. Get people to understand that this deal threatens peace. We need to move at all levels.”

The concluding comment of the night came from an audience member calling for the Palestinian and Muslim community in the UK to elect Palestinian representation in Parliament. And on that, the event concluded for iftar.