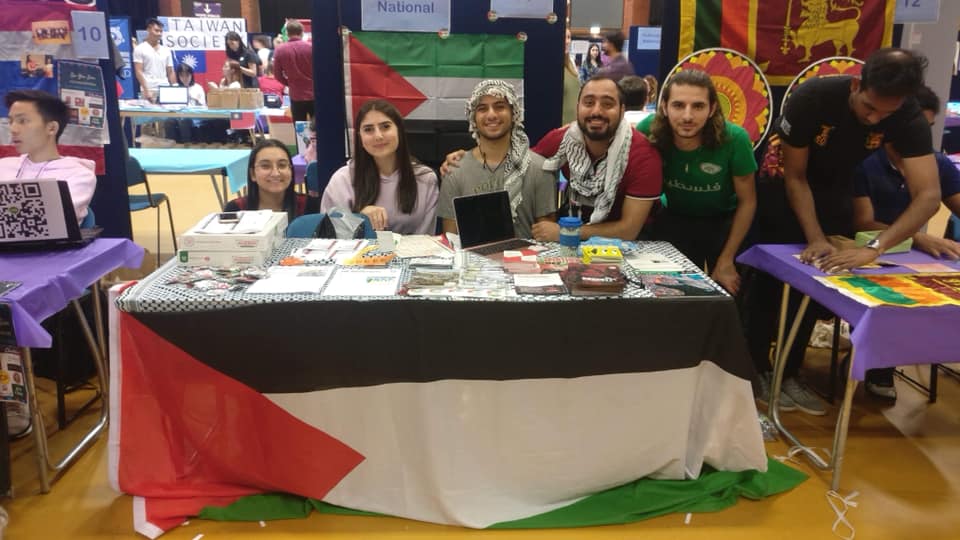 Student Advocates for Palestine in 2019

As ever students across the country have been busy advocating and campaigning for a free Palestine this academic year. Students at King’s College London Action Palestine Society, University of Leicester Palestine Society and Warwick: Friends of Palestine Society have all stood resilient in resisting the invitation of Israeli Occupation Forces Lt. Colonel Eyal Dror being invited to speak on campus. Warwick’s stance against the normalisation of apartheid, settler-colonialism and racism on campus is an inspiration to us all as their occupation of rooms in their Student Union remains strong since it began on November 18th and announced its victory on December 18th. We stand in solidarity with them and commend them on their struggle.

A big congratulations to University of Sheffield Palestine Society (pictured above) for their achievements so far this year:

“Our campaigns this year attracted a lot of attention, and we were reported on news by BBC Sheffield Radio, Sheffield Live as well as Forge Press, we have also met with the University Executive Board and discussed first steps with the chancellor to divest from unethical companies. This is also without mentioning that Sheffield was first city this year to recognise Palestine as a sovereign state,”  Yazan Khader, President of University of Sheffield Palestine Society, told PCF.

This term we sent educational and campaigning resources to over 20 Palestine societies and were delighted to see them in use on Freshers’ Fairs from Oxford to Glasgow, Westminster to Leeds. We also collaborated on three events. The first was in October with SOAS Palestine Society who hosted Women in Hebron (read our blog on this event). The second was with Aston Palestine Society who hosted Yana Shabana. Aston PalSoc president Shadi Abdelaziz told Palestine Voice:

‘Yana gave a talk about her own personal and unique experience as both a Russian and Palestinian national living under occupation in the city of Hebron in the occupied West Bank. She highlighted the water shortages that Palestinians endure as a result of the illegal Israeli settlements as well as the abuse that Palestinian children face when they go to school. She emphasised the way in which Palestinians are treated as second class citizens in their own country. After her shared experience, the floor was opened for questions from the audience which were all answered in great professionalism, whether they derived from pro-Palestinian or pro-Israeli narratives.’

On Day 17 of Warwick Occupy’s takeover of our Students’ Union we linked up journalist Ahmed Alnaouq with Warwick Friends of Palestine Society for a talk. Ahmed is project manager for the Gaza team of We Are Not Numbers, an organisation devoted to Palestinian youth telling the human stories behind the numbers in the news which has published over 800 pieces and many documentaries. Ahmed gave a powerful and heartfelt account of the murder of his brother and friends in 2014 after being struck by an Israeli missile.

Looking Ahead to Student Advocates for Palestine in 2020:

This year’s IAW will take place around March 21st, the day of commemoration for South Africa apartheid’s Sharpeville massacre.  Under the theme ‘United Against Racism’ this is a crucial opportunity to raise awareness of the rife anti-Palestinian racism in British society and further embed our cause into the wider anti-racist movement.

In March we are bringing over and touring members of Hebron’s cooperative Women in Hebron around universities throughout the UK. They will tell personal stories of living through decades of Israel’s violent occupation in Hebron whilst empowering local women through selling their embroidered goods. This is not to be missed! Email omar@palestinefoundation.org.uk to secure your PalSoc’s date on the tour.

It is fantastic that there are currently young students studying with us in the UK from Gaza. We want to help bring them to your campus to amplify their voices and #ReclaimtheNarrative. Get in touch to organise an event.