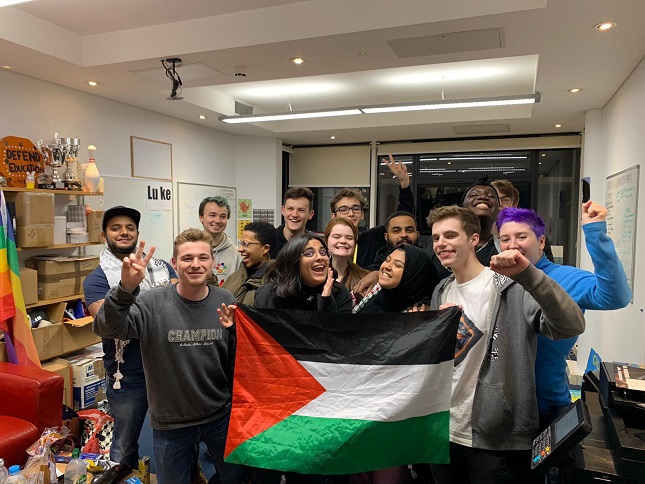 Warwick Occupy Speaks: On the Frontline in the Fight Against Institutional Racism on Campus

On day 14 of Warwick Occupy’s occupation of rooms in their Student Union, they speak out in their struggle against institutional racism on campus. Despite still awaiting a response for their two sets of demands (one and two) submitted to the University and Students’ Union last week, they stand resilient in their direct action.

“Morale is still high and people are still motivated, but everyone is also exhausted. We haven’t been able to have much sleep and proper food, but the sense of community is amazing. We have been organising talks and activities within the occupied rooms to keep people engaged and to make it intellectually-nourishing.”

“We have had talks about gendered islamophobia & we’ve had painting nights & tomorrow one of our occupants is giving a talk about how the British education system is still racist and colonial. We want the occupation to not just be about fighting against the institution but also be intellectually stimulating and educational.”

This is what Palestine solidarity looks like. Read more on the occupation below.

Our movement, Warwick Occupy, was established on the evening of the 19th of November following the University and Students’ Union’s decision to ignore students’ requests to cancel a talk given by IDF Colonel Dror, hosted by the Jewish Israeli Society and sponsored by the Islamophobic and racist organization StandWithUs. Prior to the event, there was a request directed to the Students’ Union and the University of Warwick to cancel the talk, signed by almost 300 people including students, academics, and student societies’ executive members. Their refusal to cancel the event led to a student protest in solidarity with the Palestinian people to send a message to the University and Students’ Union that we will not be silenced, and that giving a platform to an official of a military that has violated human rights and international law is unacceptable on our campus. The protest then proceeded to the Students’ Union Headquarters and a spontaneous decision was taken to start an occupation of certain SU offices since our SU deems the Israeli occupation of the Palestinian people acceptable. And thus, our movement Warwick Occupy came to be. Our occupation is here to stay until the Students’ Union and the University agree to our demands. Warwick Occupy is a movement intended to fight institutional racism against Palestinians and all ethnic minorities.

This occupation has been supported not just by Palestinians, but by many different minority groups who have come in solidarity with Palestinians and understand their struggles. The community in our occupation of the Students’ Union is a diverse one, uniting in the face of injustice, against all forms of racism, islamophobia, and other systems of oppression. It includes members from Warwick Friends of Palestine, Warwick Arabic Society, Warwick For Free Education, Warwick Pride, Warwick Anti-Racism, and Warwick Anti-Sexism, as we all collectively push for institutional change and a shift in discourse surrounding Palestinians. Amongst our demands is the implementation of certain aspects of Boycott, Divestment and Sanctions. We have demanded the divestment from the Israeli occupation and the boycott of all brands that are complicit in the oppression of the Palestinian people such as Hewlett-Packard (HP) and Caterpillar. We have also demanded that the university publish their investments after having previously refused to reveal them upon a Freedom of Information Request from the Palestinian Solidarity Campaign. Students who are paying tens of thousands of pounds each to this university have a right to know what their money is being invested into and whether their fees are being used to further dehumanize and subject a colonized people.

Palestinians, whether they are living in the West Bank, Gaza, or have been displaced elsewhere, have grown accustomed to discrimination and having their struggles ignored. Hence, we as Palestinian students, are overwhelmed and shocked to see so many students and staff members from the international community join in solidarity with us to help us make our voices heard. The rights of both Palestinian refugees and Palestinians living under occupation have historically been criminally ignored by the international community, so seeing allies and oppressed groups stand in solidarity with us has filled us with hope. This movement in solidarity with Palestine has recently become a national movement in the United Kingdom, not just at the University of Warwick, and Warwick Occupy is proud of all the connections that it has established – both national and transnational. Our occupation has also coincided with the University and College Union strikes, in which faculty members are demanding their right to secure non-precarious labor from the University. The UCU at Warwick has expressed solidarity with our movement, and we have been greatly supported by faculty members. This coinciding of various movements in our university and across the country to fight against all forms of inequality, whether social or economic, is a testament that to abolish a harmful hierarchal system, those at the bottom have to unite as they demand their right to equality, security, and freedom.

By Hadeel Himmo on behalf of Warwick Occupy