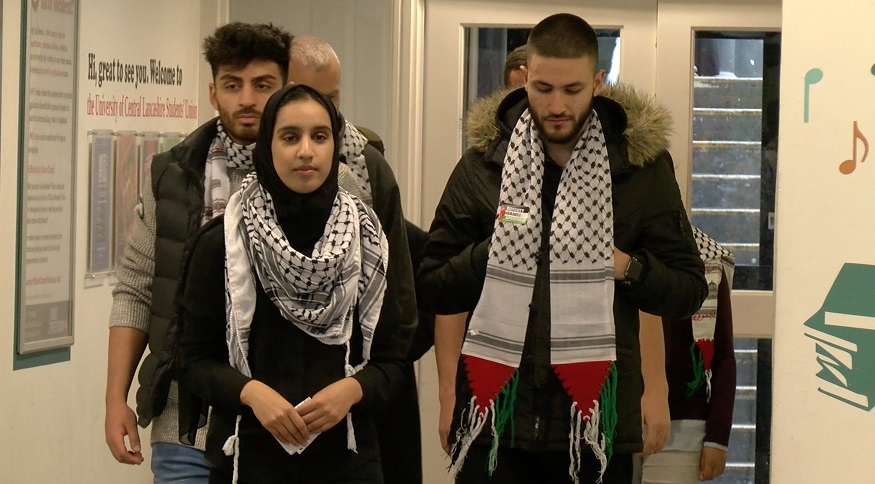 Show of Solidarity at UCLan, supported by PCF

Our first Student Advocates for Palestine (SAP) collaboration has been with UCLan’s Friends of Palestine Society (FPS). UCLan marked the UN’s International Day of Solidarity with the Palestinian People with a powerful piece of political theatre at their campus.

On the 29th November 2018, UCLan FPS captivated students with an imaginative piece of dramatic protest inspired by Geneva University’s own display from May 2018 (watch here). Paper aeroplanes rained down on students dressed in Palestinian costume as they marched towards freedom, symbolising the barrage of projectiles which have struck down Palestinians in Gaza this year.

As the student line progressed in time to Palestinian music, adorned in keffiyeh, a crowd of students gathered to watch the performance unfold. Slowly, one by one, the students fell to the ground, dead, until none remained standing.

Imitating the murder of Palestinians in the Great Return March, which started on the 30th March 2018, where over 4000 Gazans have been struck by live ammunition, killing over 180 including 23 children, this act of creative symbolism emotively displayed the blatant injustice inflicted by Israeli forces on Gaza this year. However, it also illuminates the broader story of Israeli oppression of Palestinians more generally throughout the Occupied Territories; indiscriminate, inhumane and unjust. 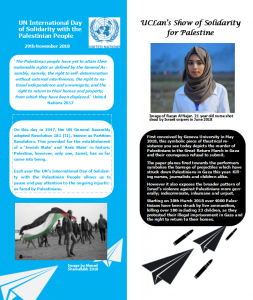 During the display, leaflets were handed out to the intrigued audience, connecting the symbolism of the performance to the situation of Palestinians in Gaza and the Occupied Territories, calling for ‘Apartheid Off Campus’.

PCF offered the small and dedicated team at UCLan support from initial planning stages right to its manifestation on the day. This involved designing and supplying leaflets and fact sheets which were distributed; supplying kuffiyehs and flags used in the performance and filming the event.

“The show was powerful symbolic gesture to the Palestinian people demonstrating our solidarity, made possible with the round-the-clock support and resources supplied from Palestine Community Foundation” described Chair of UCLan Friends of Palestine Society Sarah Ahmed.

UCLan have proven the power of creative resistance, successfully drawing wide attention to the plight of Palestinians through their performance as well as the need for students to unite in ending their own universities’ complicity in the oppression of Palestinians.

UCLan’s action was featured in a compilation video by Palestine Solidarity Campaign (PSC) who led this national day of student action, calling for #ApartheidOffCampus. See their video below.

Find out more about Student Advocates for Palestine and apply for our support.